Does Cannabis Help With Alzheimer’s? 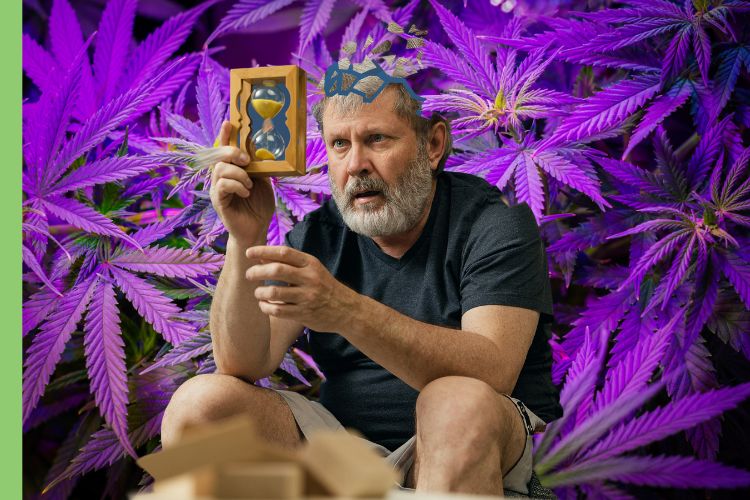 Cannabis and Alzheimer’s? Aren’t stoners known for forgetting everything? How on Earth would this help?

Scientists have been exploring the therapeutic effects of cannabis for a host of health conditions, including neurodegenerative diseases like Alzheimer’s.

Among the many compounds of cannabis, the best known are cannabidiol (CBD) and tetrahydrocannabinol (THC), which have received the bulk of the research community’s attention. However, lesser-known compounds, such as cannabinol (CBN), are also making their way into research. Early study results suggest that CBN, for example, may be able to help protect brain cells in aging and neurodegenerative processes.

HOW DOES CANNABIS AFFECT ALZHEIMER’S DISEASE?

It’s clear that researching cannabis for help with Alzheimer’s disease and dementia is emerging with science and there is a need for further studies. Research has found improvements in memory, especially with tetrahydrocannabinol (THC), even finding that the mice studied had a less disease-progressing plaque that’s found in Alzheimer’s disease patients.

Studies have recently bridged over to human trials, including one developed by King’s College in London that’s exploring the effect of cannabis on dementia symptoms. Head researcher Chris Albertyn discussed how he’s using Sativex, an oral medical marijuana spray, to see whether cannabis reduces agitation, aggression, or confusion.

He said, “Currently there is a scarcity of pharmacological treatments out there and some of them are damaging or dangerous, especially in the long-term. We’re looking for a safer and more effective alternative.”

WHAT’S THE DEAL WITH CBN AND ALZHEIMER’S?

CBN is a degraded product of THC. It’s mostly found in very aged cannabis plants – CBN is no longer psychoactive compared to THC, this compound could be a new candidate to explore the beneficial effects of cannabinoids.

WHAT ABOUT CBD AND THC FOR ALZHEIMER’S?

Cannabidiol (CBD) has garnered a lot of popularity in the past few years when it comes to mitigating pain and anxiety, especially for those with chronic conditions.

When it comes to the link between CBD oil and Alzheimer’s, there’s not a ton of research, but the results of what has been studied are promising.

Studies don’t show that CBD ​​can stop, slow, reverse, or prevent the diseases that cause dementia. However, research suggests that cannabis may help manage some behavioral symptoms, like agitation and aggression.

A recent study’s results implied that the CBD components of cannabis might be useful to treat and prevent AD because CBD components could suppress the main causal factors of AD. Moreover, it was suggested that using CBD and THC together could be more useful than using CBD or THC independently.

ANY OTHER SIGNIFICANT FINDINGS?

One part of aging is your brain’s energy decrease. Energy metabolism is produced from the mitochondria. The initial idea is whether any compound will help the mitochondria function, which can help Alzheimer’s patients and people with other neurodegenerative diseases (like neuropathy).

In the aging process, mitochondria become dysfunctional or are inefficient, and it’s more dramatic in neurodegenerative diseases. Besides Alzheimer’s, it also happens in Parkinson’s disease, Huntington’s disease, frontotemporal dementia, and others.

WHAT ARE THE SIDE EFFECTS?

The fact that cannabis is still illegal in some places aside, using cannabis as a symptomatic treatment for diseases like Alzheimer’s and dementia is complicated by its side effects.

According to the Centers for Disease Control and Prevention, it’s thought that cannabis can have an impact on the developing brain in children and teens. It has been linked to anxiety or depression in some groups, though this hasn’t been studied in those with Alzheimer’s disease. There are physical effects too, depending on the way it is consumed: Smoking cannabis can cause damage to lung tissue.

Meanwhile, CBD has its side effects too: According to Harvard Health, it can cause drowsiness, dry mouth, and other mild symptoms. Those using this treatment should check with their doctor for any drug interactions. Herbal supplements may also interact with CBD.

Scientists will continue to research cannabis’ assistance in Alzheimer’s symptoms, but their next stage will help determine optimal doses, if using CBD in the early stages of cognitive decline could slow its progression, and if delivering the CBD using an inhaler would assist in delivering the chemical directly to the brain.

Future research is needed to investigate the use of cannabinoids for the treatment of AD in a clinical trial setting.

What is CBN? How is it different from CBD?

The Entourage Effect: Working Together