Why Is Cannabis Illegal? A Brief History 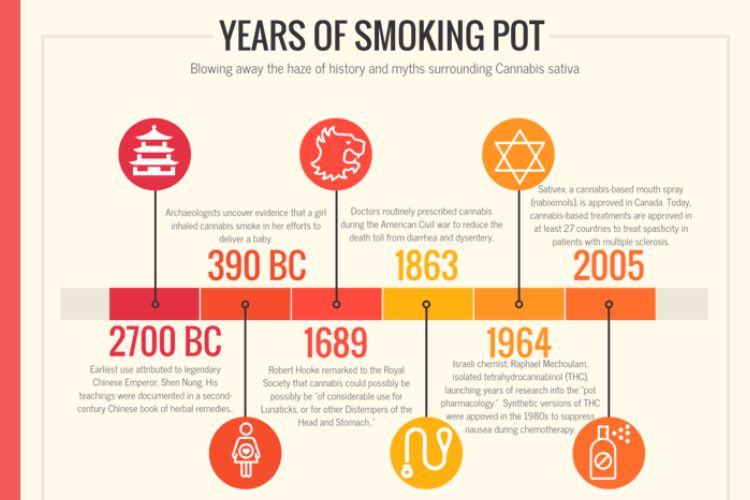 So you think you know about cannabis? Well, you’re in for a thousand-year-old treat.

Cannabis, my friend, can be found dating as far back as 12,000 years ago in Central Asia. Since then, cannabis seeds have accompanied the migration of humans throughout the world! Records of the medicinal use of cannabis appear before the Common Era in China, Egypt, and Greece (Herodotus), and later in the Roman empire (Pliny the Elder, Dioscorides, Galen).

The medicinal properties of the cannabis plant have been known for millennia. As far back as 2800 BC, cannabis was used to treat a vast array of health problems and was listed in Emperor Shen Nung’s pharmacopeia.

We’re going to take you on a voyage to find out more below.

A QUICK TIMELINE OF CANNABIS

The first evidence of smoking cannabis was found in a 2,500-Year-Old Pot.

The topical application of cannabis for inflammation is mentioned in the Ebers papyrus, written in Egypt around 1500 BC.

Cannabis has a long history of spiritual use in India. It is said that the Hindu god Shiva rested under a cannabis plant and ate its leaves following a family argument. Shiva is referred to as the Lord of Bhang. The Vedas, a collection of ancient scriptures, refer to cannabis as an herb to release people from anxiety. One story in the Vedas describes a drop of heavenly nectar falling on the earth and becoming the cannabis plant.

The Ancient Greeks used cannabis for inflammation, earaches, and swelling. In his Histories, the Greek historian Herodotus described cannabis as being smoked for spiritual, emotional, and sometimes recreational purposes. He discussed groups coming together and smoking, stating that the people smoking marijuana would “howl with pleasure.”

In 70 AD, Roman medical texts listed it as a cure for earache and as a way to suppress sexual desire. The Romans also boiled the roots of the plant and used them as a treatment for gout, arthritis, and generalized pain.1 The Arabians used it from 800 AD to 900 AD for migraines, pain, and syphilis.

The English also documented many medicinal uses of marijuana for ailments, such as:

So, now we know that cannabis originally evolved in Central Asia before people introduced the plant into Africa, Europe, and eventually the Americas.

Hemp fiber was used to make clothing, paper, sails, and rope, and its seeds were used as food.

ENTER THE GOLDEN AGE OF CANNABIS

Cannabis became all the rage in Western medicine in the late 19th and early 20th centuries. Queen Victoria took cannabis for painful menses, and Empress Elisabeth (Sissi) of Austria took it for cough, and possibly also to stimulate the appetite. Sissi was generally wary of medicines and appreciated that cannabis was a natural remedy.

Cannabis appeared as an ingredient in many patent medicines of the day, but it was a small percentage compared to the number containing opium or cocaine.

SO WHAT ABOUT CANNABIS IN AMERICA?

This ancient and extensive history of cannabis farming has given rise to the idea that prohibitions put in place in the mid-20th century were the first of their kind — a whirlwind of racial, political, and economic forces that successfully used marijuana prohibition as a pretext for suppression.

By contrasting prohibition with our ancient history of cannabis farming, some historians make our modern-day drug laws appear irregular and shortsighted. In his seminal (and controversial) book on cannabis, “The Emperor Wears No Clothes” (referred to by many as “the Hemp Bible”), Jack Herer opens with the following line:

For thousands upon thousands of years, all over the world, whole families came together to harvest the hemp fields at the height of the flowering season, never dreaming that one day the U.S. government would be spearheading an international movement to wipe the cannabis plant off the face of the earth.

The origins of cannabis in the United States can be related back to the earliest days of settlement when hemp was grown like any other crop. In the 17th century, the production of hemp-a variety of the cannabis plant-was highly encouraged to make clothing, rope, and sails. In 1619, the Virginia Assembly passed legislation requiring that all farmers grow hemp. Some states even traded hemp as legal tender.

It was in the 1920s that cannabis began to catch on. Some historians say its emergence was brought about by Prohibition. Its recreational use was largely restricted to jazz musicians and people in show business. “Reefer songs” became the rage of the jazz world. Cannabis clubs called tea pads sprang up in every major city. These establishments were tolerated by the authorities because cannabis was not illegal and patrons showed no evidence of making a nuisance of themselves or disturbing the community.

During the Great Depression, massive unemployment increased public resentment and fear of Mexican immigrants, escalating public and governmental concern about the problem of marijuana. This instigated a flurry of research that linked the use of marijuana with violence, crime, and other socially deviant behaviors, primarily committed by “racially inferior” or underclass communities. By 1931, 29 states had outlawed marijuana.

Enter Harry J. Anslinger & the Federal Bureau of Narcotics (a precursor to the DEA)

Harry J. Anslinger (a huge racist) was the first Commissioner of the FBN and remained in that post until 1962.

Concern about the rising use of marijuana and research linking its use with crime and other social problems created pressure on the federal government to take action. Rather than promoting federal legislation, the Federal Bureau of Narcotics strongly encouraged state governments to accept responsibility for control of the problem by adopting the Uniform State Narcotic Act.

After a lurid national propaganda campaign against the “evil weed,” Congress passed the Marijuana Tax Act. The statute effectively criminalized marijuana, restricting possession of the drug to individuals who paid an excise tax for certain authorized medical and industrial uses.

During World War II, imports of hemp and other materials crucial for producing marine cordage, parachutes, and other military necessities became scarce. In response the U.S. Department of Agriculture launched its “Hemp for Victory” program, encouraging farmers to plant hemp by giving out seeds and granting draft deferments to those who would stay home and grow hemp. By 1943 American farmers registered in the program harvested 375,000 acres of hemp.

Cannabis gained popularity among the counterculture, who considered it a harmless high. Its use was popular among college students, free-spirited Beats, anti-war activists, hippies, and other youth. President John F. Kennedy and Vice President Lyndon Johnson commissioned reports that found that marijuana did not induce violence or lead to the use of other more dangerous drugs.

Congress passed the Controlled Substances Act, which placed marijuana as a Schedule I drug, along with LSD and heroin. According to the act, marijuana had no medicinal value and a high potential for abuse, giving it harsher criminal penalties. This law made it difficult for doctors and scientists to study marijuana and its many uses.

The public opinion of marijuana shifted back to it being dangerous, as many considered it a gateway drug to harder drugs such as cocaine and heroin.

In 1982 First Lady Nancy Reagan started the “Just Say No” campaign. Following this many programs like the Drug Abuse Resistance Education (DARE) were established, which brought police officers into schools to discuss the dangers of drug abuse. Funding and use of this program were later cut back as research showed that it did not lead to decreased drug use in youth.

In 1986, the Anti-Drug Abuse Act increased penalties for possession and distribution of marijuana yet again. Following that, an amendment to the act established a “three strikes policy” that allowed for life sentences for repeat offenders and the death penalty for kingpins.

Amidst the endless push-and-pull, 1996 saw California become the first state to legalize medical marijuana, with three other states following over the next two years. This broke the ice for more than 20 states to create medical marijuana programs between 1996 and 2012. The bad news? Federal law still lags.

In 2012, Colorado and Washington made history by becoming the first states to legalize marijuana for recreational use, both doing so via referendums. This marked the first time that Americans could purchase cannabis from state-legal dispensaries, and represented a turning point in public perception.

Introduced in 2014, the Rohrabacher-Farr Amendment prevented the Department of Justice from interfering with state medical marijuana laws. The same year, the federal government issued guidelines for banks to provide financial services to legal marijuana vendors (COLE memo), which had been a major business hurdle.

In 2018, Epidiolex became the first marijuana-based drug to be approved by the Food and Drug Administration, and the Farm Bill federally legalized hemp.

In 2020, the United Nations reclassified cannabis officially recognizing the medicinal and therapeutic benefits of the drug.

On April 1, 2022, the US House passed legislation that would legalize marijuana nationwide as well as remove criminal penalties for anyone who manufactures, distributes or possesses it. In order to be enacted this bill will still need to pass the US Senate.

THE FIGHT ISN’T OVER

The next challenge in the fight for legalization is whether the federal government will continue to list marijuana as a Schedule I drug. Federally rescheduling—or de-scheduling—marijuana has its benefits: it gives us the opportunity to learn more about the drug, its benefits, its drawbacks, and its applications.

Improvements in clinical research may help to regulate the quality and potency of medical marijuana in order to tailor it to patient’s specific individual needs. Legalization may also lead to the expungement of marijuana offenses from criminal records and aid in achieving a more socially just society. As far as we’ve come, there is still much progress to be made, and we are proud to be at the forefront of the fight.

Best Cannabis for Energy and Productivity