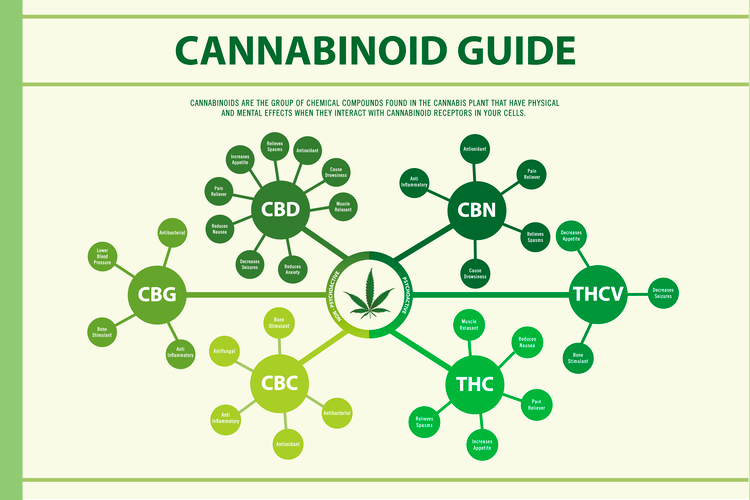 You might have just scratched the surface of your cannabis journey and only know of the leafy green plant as weed, pot, or ganja. But by now, most people have heard of the major cannabinoids THC (compound that get’s you high) and CBD (compound without the high). Cannabis contains over 100 other less abundant cannabinoids known as minor cannabinoids, which play an important role in achieving specific medical benefits and effects when consuming it.

As consumers become more knowledgeable about the potential health benefits of CBD, THC, and the minor cannabinoids found in cannabis, they are also looking for products that pair CBD or THC with some of the minors. The way the major cannabinoids work with the minors can improve the efficacy of the product and the way they interact with the Endocannabinoid System (ECS).

CANNABINOIDS – WHAT ARE THEY?

Cannabinoids are naturally occurring compounds found in the Cannabis sativa plant (hemp & marijuana). They interact with the body’s Endocannabinoid System, which is responsible for a variety of physiological and cognitive processes. There are many different cannabinoids, each with its own unique properties.

Cannabinoids are also found within the human body, in several other plant species, and can even be formulated synthetically. Distinct cannabinoids can induce effects as far-ranging as euphoria, pain relief, paranoia, sleepiness, and even increased appetite—yes, “the munchies.”

Cannabinoids can be categorized into three groups:

Phytocannabinoids can be split into two categories: major and minor cannabinoids. These classifications are designated based on their levels within the cannabis plant, with major making up a large proportion and minor only present in small quantities. The major cannabinoids are understood to be Cannabidiol (CBD) and Tetrahydrocannabinol (THC) with the other 100+ comprising the minor cannabinoids.

Two decades ago, the only dominant cannabinoid was THC. Then the establishment of a worldwide CBD economy caused an additional cannabinoid to rise into exploration.

A few minor cannabinoids that you may have heard of: CBDA, CBG, CBN, CBC, THC-A, THCV, THCP, THC-A, and Delta-8-THC – let’s chat about a few of these.

CBG is often referred to as “the mother of all cannabinoids” because it is the first cannabinoid the plant produces. Its acidic form —  CBG-A – is the original compound (precursor) from which the other cannabinoids are derived through different processes of synthesis as the plant grows. Think of those cannabinoids as the children of CBG. CBG is most frequently found in strains of cannabis and hemp that has a low amount of THC and a high amount of CBD.

In terms of its potential benefits, CBG may be effective in treating pain, nausea, and inflammation. Research has shown that CBG may be an effective treatment for Glaucoma because of the way it interacts with the eyes’ endocannabinoid receptors, reducing pressure in the eye. In experiments on mice, scientists have also found that CBG can also decrease inflammation in the bowel. Cancer studies have also proven that CBG may also block receptors that trigger cancer cell growth.

CBN, is a non-intoxicating cannabinoid that is a derivative of THC-A, one of the acids CBG-A converts to. It was the first cannabinoid to be isolated by scientists almost 100 years ago. The cannabis plant produces CBN through the degradation of THC over time. This cannabinoid isn’t synthesized in the cannabis plant but is derived during the degradation of THC. Oxidation breaks down the THC-A molecules and converts them into CBN. Because there is very little CBN in young cannabis plants, it is hard to extract. Regardless of that, sales of products containing CBN (mostly edibles) totaled more than $65M in California, Colorado, Nevada and Oregon in the last four quarters, according to Headset, a data analytics firm in Seattle.

In terms of its potential health benefits, CBN is best known for its sedative qualities, but it has also been used as an anticonvulsant. In a study on rats, scientists found that CBN could be used to relieve muscle and joint pain, and that when paired with CBD, the product was more efficacious. A study in 2005 also found the CBN could help delay the onset of ALS, Lou Gehrig’s Disease which affects cells in the brain and spinal cord.

CBC is one of the most abundant minor cannabinoids found in cannabis. CBC is a non-intoxicating cannabinoid that activates the CB2 receptors but does not bind well with the CB1 receptors in the brain. We know this unique cannabinoid for its anti-inflammatory and immune-supporting functions. In one study, high doses of CBC were more effective than the NSAID phenylbutazone in treating inflammation.

In terms of other potential health benefits, studies have shown that CBC may be effective in fighting cancer because of its ability to inhibit growth of tumors. CBC is also purported to block pain and inflammation, particularly when paired with THC. As a result, it may be used to help with Irritable Bowel Syndrome, Crohn’s disease, and post-operative pain. When paired with THC and CBD, CBC has also exhibited anti-depressive properties.

THCV is a psychoactive cannabinoid found mostly in Sativa strains of the cannabis plant. Unlike its cousin, THC, it does not elicit “the munchies” because it actually suppresses the appetite instead of awakening it. Those who use THCV describe feeling alert and energized.

In terms of its potential health benefits, THCV may be able to be used to relieve stress, reduce the chance of experiencing a panic attack, and treat PTSD. Researchers are also exploring the use of THCV for treating Alzheimer’s Disease, Parkinson’s Disease, and MS, as the cannabinoid is able to protect nerve cells against degeneration or damage.

HOW DO THEY WORK? THE ENDOCANNABINOID SYSTEM

Cannabinoids affect your body through the endocannabinoid system (ECS). That system is named for substances your body naturally produces—and depends on—that are very like plant-based cannabinoids. The ECS has far-reaching effects on your body, and that’s why cannabinoids are believed to have so many different medicinal uses.

A major job of the ECS is homeostasis, which regulates many of your body’s essential functions, including:

Your endocannabinoids communicate with your nervous system to keep all these things within acceptable parameters. When you consider that, it makes sense that cannabinoids can treat numerous medical problems.

An important difference between your endocannabinoids and cannabinoids from an outside source, however, is that yours work in precise coordination with only the system that needs correcting at that moment. When you inhale cannabinoids from, say, smoking cannabis, they flood through your whole body and make both desirable and undesirable changes at the same time.

WHAT TO LOOK FOR

When legally purchasing cannabis products (hemp-derived or marijuana), look for a producer or store with knowledgeable employees who can help you find the right product and formulation to fit your condition and preferences. If it’s important to you, ask about the products and their production/cultivation methods.

Buying cannabis in states where it’s still outlawed is not only a legal risk, it could also pose a health risk as it could be contaminated.

When buying hemp-derived goods, look for companies that have had their products tested at third-party laboratories and make the lab reports available to you. (You may need to ask.) They should also display a valid Certificate of Analysis on their website or in their store.

THE FUTURE OF MINOR CANNABINOIDS

It’s safe to say that these days throughout the United States and the world – wellness is key. Therefore, the potential of minor cannabinoids becoming more prominent within the legal cannabis sphere is amazing. As folks gain more knowledge about them, demand is sure to skyrocket, creating more opportunities for local farmers to focus on growing these exciting compounds. It seems that minor cannabinoids are poised to become a ‘new frontier’ in wellness.

If you’re interested in learning more please reach out or shop here.

How to Dose THC Edibles?

Cannabis As a Substitute For Alcohol

How to Find the Best Cannabis Flower