Is Delta 8 THC Legal in Nebraska? 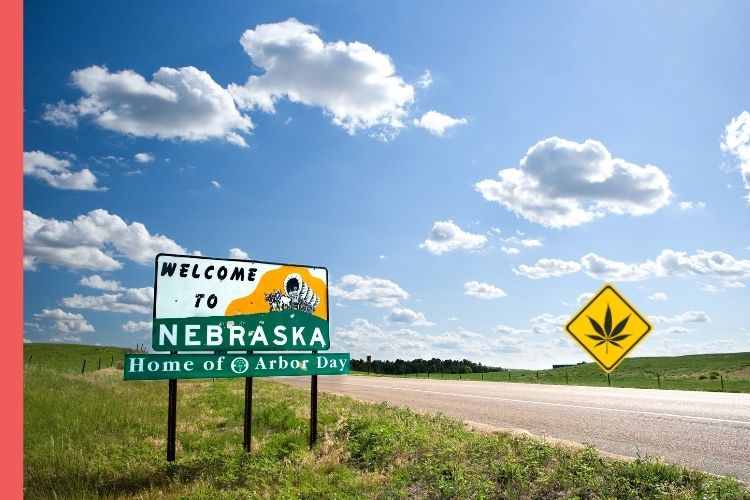 Compliance May 13
By Chad Frey 0 Comments

Hemp-derived delta-8 is legal in Nebraska, but state officials are currently reviewing its legality. Currently, the use, possession, sale, distribution, purchase, and production of delta-8 products are permitted under state law without risk of penalty or prosecution. However, with nearly 20 US states now restricting or banning delta-8 following pressure from the federal government and the DEA, we expect delta-8’s legality in Nebraska hangs in the balance. Pair this with a staunch anti-cannabis state governor and delta-8’s future doesn’t look promising.

It was not long ago that all cannabis products (even hemp) were illegal and listed as Schedule I drugs. However, it all changed with the introduction of the 2018 Farm Bill — at least for most people.

While some states are more permissive, others still keep strict regulations even before the historic 2018 Farm Bill. Nebraska is notorious for being one of the most resistant to this change in regulation.

In this article, we’ll cover, in detail, the laws regulating delta 8, delta 9, and delta 10 THC in the state of Nebraska. We’ll cover the differences between delta 8 THC and delta 9 THC and let you know how to use and where to buy delta 8 THC.

Fortunately, Nebraska has legalized the production of hemp and all hemp-derived cannabinoids, isomers, and other derivatives. That means that Delta-8 is legal and accessible in Nebraska.

Take an in-depth look at Nebraska Delta-8-THC laws below:

Looking for legal Delta 8 THC you can buy in Nebraska?

The best place to order delta 8 THC and delta 9 THC is online from a trusted vendor. Online shops are able to offer better prices (less overhead), more convenience (you don’t have to leave your home), greater product selection, fresher product stock (direct from the manufacturer), and it enables you to check third-party testing.

Most delta 8 THC users in Nebraska order online and have it shipped. This practice is currently legal within the state.

Legalization of hemp for Nebraskans began as early as 2014 when lawmakers proposed and approved the agricultural pilot program for the state. Hemp cultivation and hemp production began soon after following additional guidance laid out in the 2018 Farm Bill regarding uniform regulations for hemp at the federal level. Now the possession of hemp has become separate from the possession of marijuana in the state, and laws are heading in the right direction for providing favorable laws to Delta-8 users.

Nebraska enacted its own hemp laws shortly after the passing of the 2018 Farm Bill. These laws broadly legalized hemp (and CBD) and labeled hemp material as an “agricultural commodity” that could be grown, processed, and marketed.

Nebraska’s definition of hemp is similar to the federal definition. Hemp is defined as any Cannabis Sativa material, living or not, including cannabinoids, isomers, extracts, and other derivatives, providing the dry material did not contain more than 0.3% Delta-9-THC.

Given this definition, we believe that Delta-8-THC (a naturally occurring hemp derivative) is legal in Nebraska. Other states in the area (like South Dakota, Kansas, and Missouri) have similar Delta 8 laws, and the local market may include products from states that aren’t yet well regulated.

Here are some snippets from the official Nebraska state laws:

(8) Federally defined THC level for hemp means a delta-9 tetrahydrocannabinol concentration of not more than 0.3 percent on a dry weight basis as defined in section 10113 of the Federal Agriculture Improvement Act of 2018, Public Law 115-334, as such section existed on January 1, 2019;

Is Delta 8 a Controlled Substance in Nebraska?

The state’s controlled Substances Act does address tetrahydrocannabinols from cannabis under the “Marijuana” section of the bill. However, it prefaces this text by excluding “hemp” (as defined above) from the state’s legal definition for marijuana.

Therefore, no, Delta-8-THC is not a Controlled Substance in Nebraska.

Nebraska law does not define any possession limits for hemp-derived products, including Delta-8-THC.

Still, Delta-8 could be easily confused for Delta-9 THC by authorities without proper documentation and lab testing.

Basic lab testing checks only for tetrahydrocannabinol, meaning that extensive lab tests are needed to differentiate between Delta-8 content and Delta-9 content when proof of legal possession is needed.

This is a bit tricky. Marijuana (cannabis with above 0.3% THC) is prohibited for both medical and recreational use in Nebraska. Nebraska has decriminalized possession of small amounts of cannabis, punishing possession of up to one ounce with a $300 citation, but the sale of any amount of marijuana is still a felony (with mandatory minimum prison sentences). For instance, someone convicted of selling a single joint face a mandatory one-year prison sentence in addition to a stiff fine.

If the Delta 9 THC is below 0.3% on a dry weight basis and derived from hemp, like flowerz edibles, then it is considered legal per the 2018 farm bill.

Delta 9 THC is most commonly known as just THC. It’s one of the most famous cannabinoids since it is the main compound in cannabis that gets you high. Unfortunately, Delta 9 THC is illegal at the federal level, with just a few states allowing it.

Delta 8 THC is found in minimal amounts in cannabis compared to delta 9. It produces similar but milder effects than delta 9 THC. However, it’s approximately half as potent.

These two compounds are isomers, meaning that their chemical structures are very similar. The difference is the location of a single double-bond — everything else is identical. Still, these small variances are responsible for their different effects and legal classification.

When it comes to health benefits, you can get pretty much the same out of both. Although some would consider delta 8 THC’s reduced potency as a disadvantage, delta 8 has advantages over delta 9.

The advantages of delta 8 THC include:

A few disadvantages of delta 8 THC include:

Yes! As previously mentioned, due to delta 8 THC having around half the potency of delta 9 THC, you’re less likely to use too much accidentally, and it leads to fewer undesired side-effects, like anxiety and paranoia.

While side effects are possible, there has never been a reported death or overdose from delta 8 THC. Taking too much may make you feel nauseous, dizzy, or sedated. Some people wake up feeling groggy the day after using high doses of delta 8 THC.

Can You Travel to Nebraska With Delta 8?

Yes, you can travel into Nebraska with delta 8, provided it’s sourced from hemp plants carrying no more than 0.3% THC. Likewise, the hemp-derived delta 8 product(s) in your possession should contain no more than 0.3% THC. If the THC quantity is higher, it’s classified as marijuana-derived. Marijuana and marijuana-derived products are prohibited under state and federal law.

Despite Nebraska’s poor history with cannabis, hemp-derived delta 8 is still legal, with no sign of law enforcement making arrests for the use, possession, sale, or production of delta 8 THC products. Right now, this is great news if you’re a keen delta 8 consumer. You can enjoy delta-8 products freely without fear of prosecution.

However, be under no illusion. State officials are not cannabis-friendly, and they certainly aren’t fond of intoxicating substances. We expect delta 8 to come under some scrutiny once the state’s attorney general finishes reviewing the legality of delta 8. 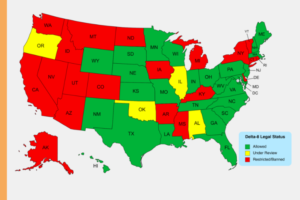 How To Unclog a Cart or Disposable Vape