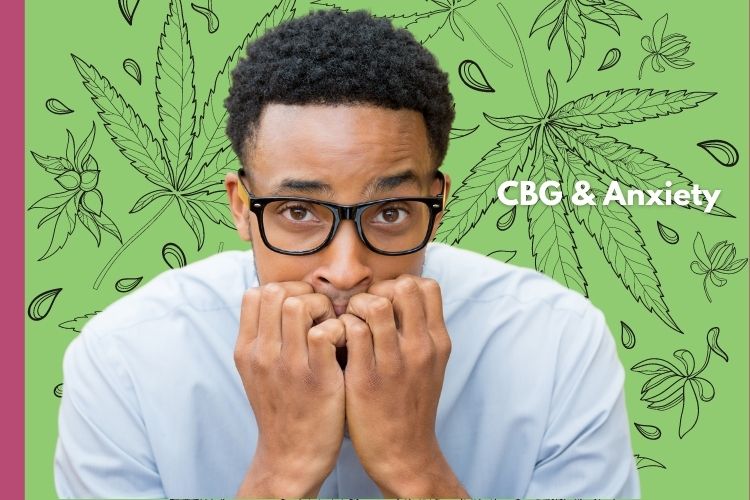 CBG May 28
By Chad Frey 0 Comments

Cannabigerol (CBG) is a type of cannabinoid, a chemical found naturally in cannabis (marijuana and hemp) plants. Early research is promising regarding the ability of CBD oil and CBG oil to help relieve anxiety.

Unlike tetrahydrocannabinol (THC), another type of cadnnabinoid, CBD doesn’t cause any feelings of intoxication or the “high” you may associate with cannabis.

CBG is often referred to as the mother of all cannabinoids. This is because other cannabinoids are derived from cannabigerolic acid (CBGA), an acidic form of CBG.

CBG is found in smaller quantities than other cannabinoids in cannabis plants. In most strains of the plant, only 1% of CBG can be found compared to 20 to 25% of CBD or 25 to 30% of THC.

This makes consumer products derived from the cannabinoid rare and often expensive. However, CBG is growing in popularity as a result of the host of potential benefits the cannabinoid has to offer.

DOES CBG REALLY HELP WITH ANXIETY?

CBG works by binding to both endocannabinoid receptors (CB1 & CB2) where it’s thought to strengthen the function of anandamide, a neurotransmitter that plays a role in enhancing pleasure and motivation, regulating appetite and sleep, and alleviating pain. Unlike THC, CBG has no psychotropic effects, so it will not give you a high, but it may make you feel high on life!

WHAT ARE SOME OTHER BENEFITS OF CBG?

The best CBG gummies for someone depend on exactly what they’re looking for. Like CBD, CBG gummies have been used to combat pain without having the intoxicating effect of cannabinoids like THC.

Research shows that CBG can also have therapeutic effects. However, human studies on this are sparse and more research needs to be done in this area. We’ve documented some below:

Inflammatory bowel disease is a condition that causes chronic inflammation in the bowel. It affects millions of people across the globe and is incurable.

An experimental animal study conducted in 2013 observed the beneficial effects of CBG on inflammatory bowel disease.

In an animal study, researchers found that CBG has therapeutic potential for the treatment of glaucoma.

Researchers administered CBG to cats with glaucoma and noticed a reduction in eye pressure and an increase in aqueous humor outflow, a fluid produced by the eye which maintains eye pressure and provides the eye with nutrition.

Huntington’s disease is a condition that causes a breakdown of nerve cells in the brain. In a 2015 study, researchers examined the potential neuroprotective properties of CBG and other cannabinoids in mice who had an experimental model of Huntington’s disease.

It was observed that CBG acted as a neuroprotectant, protecting the nerve cells in your brain from damage. It also improves motor deficits and preserves striatal neurons against 3-nitropropionic acid toxicity.

A 2020 study on the antibiotic potential of cannabis, found that CBG has antibacterial properties. Especially against methicillin-resistant strains of Staphylococcus aureus (MRSA), a bacteria which causes staph infections and is drug-resistant.

In a 2014 study, researchers observed the effects of CBG on rats with colon cancer. They observed that CBG showed some promise in blocking the receptors that cause cancer cell growth and inhibiting the growth of colorectal cancer cells.

They suggested that the use of CBG should be considered translationally in the cure and prevention of colon cancer.

IS CBD OR CBG BETTER FOR ANXIETY?

First of all, let’s take a look at the definition of anxiety. It’s a word being tossed around more frequently than ever, as we continue to live in an age where the bombardment of fearful news and things to worry about is becoming increasingly normal. However, a real ‘diagnosis’ of anxiety is a more severe or continued case of uneasiness, distress, and disproportionate fear.

The symptoms of anxiety can include:

When considering CBG vs CBD for Anxiety: It’s important to know both have been shown to be helpful in this area. CBD especially (as more research is available) has shown to be particularly helpful for more mild forms of anxiety – such as social anxiety.

CBG has displayed strong anti-anxiety effects – as well as a muscle-relaxing reaction, both of which are connected to the same nervous system. This is due to CBG binding to certain endocannabinoid receptors in the brain that ease anxiety and pain. CBG has also been linked to increased levels of dopamine, which supports anxiety levels, sleep, and appetite.

CBG has had a more intensified effect on relieving symptoms of ADHD and improving energy and focus, both of which have links to anxiety/overall mental wellbeing.

HOW DOES CBG MAKE YOU FEEL?

CBG is non-intoxicating, which means it won’t make you feel “high.” However, some people may still experience side effects, as mentioned earlier. If you experience any severe side effects after taking CBG gummies, be sure to seek medical help immediately.

WHEN SHOULD I TAKE THE BEST CBG GUMMIES?

WILL CBG SHOW ON A DRUG TEST?

CBG isn’t chemically similar to THC, so the likelihood of failing a drug test because of CBG alone is very low. However, since CBG is produced from hemp plants, which may include traces of THC — less than 0.3 percent by weight — your CBG product may contain some THC that would show up on a drug test if you’ve consumed a lot of CBG gummies prior to your drug test.

HOW TO CHOOSE THE BEST CBG GUMMIES FOR 2022

A lot of research went into creating this post on the best CBG gummies for 2022. We had to take a few things into consideration to ensure that each of these brands provides the highest quality of pure CBG gummies for your needs.

CBG gummies are a great place to start for those who are new to CBD. They’re simple to use and available in a variety of tastes, making them a lot of fun. Furthermore, they offer all of the CBG benefits without any of the psychotropic effects linked with THC.

By Chad Frey 0 Comments
Consumption May 11

5 Reasons Not to Shop by THC Percentages