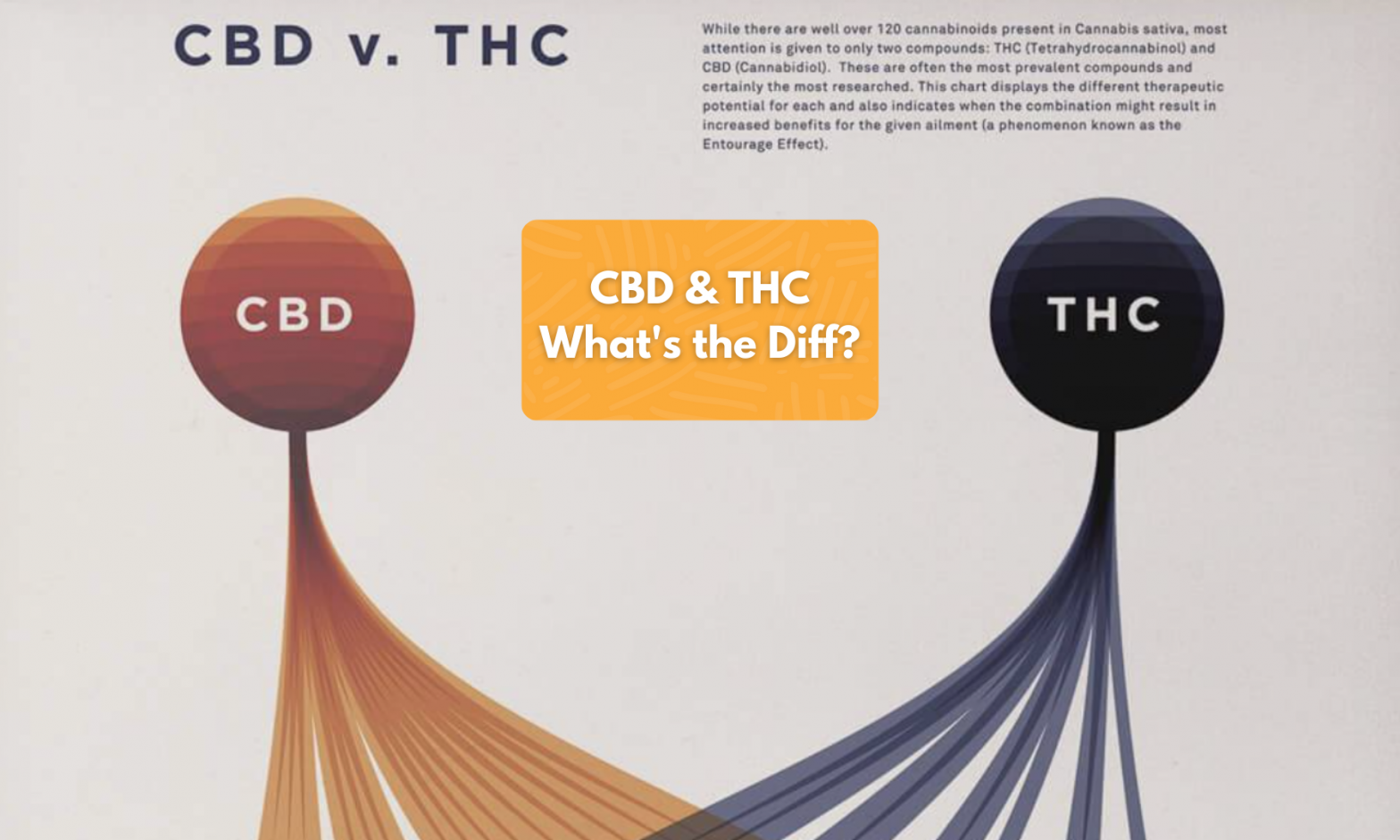 The mental effects of CBD and THC

When it comes to the mental effects of THC and CBD, the two can feel very different. Part of this has to do with the psychoactive high associated with THC. What does THC do? Taken by itself, THC’s mental high can include feelings of euphoria and calm, which can uplift depression and anxiety. But it can also negatively impact short-term memory, impair movement and coordination, and sometimes evoke feelings of anxiety and paranoia. This psychoactive high can be a deterrent to using for some, while others enjoy it and find medicinal benefits from the mood-boosting effects. THC can affect people differently—some may find the high very pleasant while others find it hard to handle.

CBD, on the other hand, has such a mild mental effect that many have mischaracterized it as being non-psychoactive. CBD doesn’t have the same type of intense psychoactive high as THC and doesn’t impact a patient’s functionality with the (sometimes) side effects we see from THC. However, CBD does have some notable psychoactive effects that can be quite helpful for patients.

Of course, CBD is also powerful on its own.

Research suggests that CBD has the power to ease anxiety and depression when taken by itself. Studies have even found that it can help reduce psychosis in individuals with conditions like schizophrenia.

The World Health Organization’s recent report on CBD found it to be safe and without the potential for abuse. And in fact, CBD has been found to reduce cravings in those addicted to other substances such as opiates.

Still, while CBD doesn’t produce an inebriating high, some patients have experienced mild negative mental side effects such as psychomotor slowing, lightheadedness, and sedation when using CBD.

When it comes to the medical benefits of these two cannabinoids, they can each help with a long list of potential conditions and symptoms. While they are somewhat different chemicals with different ways of interacting with our system, they are actually able to help with many of the same issues.

For both of these cannabinoids, pain relief is one of the most helpful and common uses. Research shows that both THC and CBD can reduce pain, and the combination of the two might be even more helpful than either alone. This may be in part because of the reduced psychoactive effects from THC when CBD is added. Still, whether you are using CBD, THC, or both, this pain-relieving potential can help patients with many different pain-inducing conditions, such as pain from an old injury or surgery, fibromyalgia, neuropathy, multiple sclerosis, and arthritis.

THC and CBD have also both been found to help with reducing inflammation and inflammatory markers. This means that both these cannabinoids have the potential to help with inflammatory conditions such as rheumatoid arthritis, multiple sclerosis, colitis, inflammation-related cancers, asthma, diabetes, and more. While more research is needed to create well-tested cannabinoid treatments for these specific conditions, it is clear from the research that both THC and CBD have inflammation-reducing powers.

Another popular use of these cannabinoids is in reducing nausea and vomiting. THC has long been known to help with nausea and has been studied in human cancer patients seeking to reduce nausea during chemotherapy treatments. Still, recent animal studies show that CBD may also be able to reduce nausea and vomiting. In these studies, mice treated with CBD (and a nausea-inducing stimulant) showed less vomiting and nausea-related behavior. So while THC is better studied for nausea relief, CBD may also be a helpful treatment.

These cannabinoids have also both been found to help with sleep. Studies on THC show that it can actually help decrease the amount of time that it takes to fall asleep and over the short term, could aid in reducing sleep apnea. It can also help patients with PTSD have fewer nightmares, and help patients with chronic pain sleep through the night. But studies show that long-term THC use can actually lead to decreased sleep quality.

CBD, on the other hand, doesn’t seem to alter sleep in healthy individuals. It has, however, shown particular promise as a treatment for anxiety-related insomnia—likely due to its anxiety-relieving effects. Those with anxiety slept better when using CBD for the first month—but those effects fluctuated over time, making it unclear whether CBD would help sleep in the long term. CBD may also be able to help those with narcolepsy stay awake during the day.

Protects from the brain

Both THC and CBD have shown potential as a neuroprotectant. In lab and animal studies, both cannabinoids showed that they can reduce neurotoxicity in the presence of toxins, and reduce markers associated with neurodegenerative conditions like Alzheimer’s and Parkinson’s diseases. While more research is needed, some human studies on CBD have shown improvements in patients with these conditions. Still, similar neurodegenerative conditions, such as dementia, saw no changes with cannabis use.

There are also some conditions that seem to be best treated by CBD, such as epilepsy. Epilepsy may be the most researched use for CBD, in part because of a grassroots movement to use CBD for children with otherwise untreatable varieties of the condition. Another reason is that GW Pharmaceuticals recently released Epidiolex, a CBD-based medicine for epilepsy. As an FDA-approved medication for epilepsy, there is now a substantial body of evidence supporting the claim that CBD can significantly reduce seizures in epileptic patients.

THC has unique effects as well. It can actually help shift your metabolism to help avoid weight gain. In one rodent study, scientists found that using THC prevented weight gain from an increased-fat diet. It even altered the gut biome of obese mice, making them more like the gut of a healthy mouse than an obese one.

Accounting for the entourage effect

While cannabinoids like THC and CBD are often studied on their own, cannabis products tend to be a blend of cannabis’s active chemicals, rather than just one cannabinoid by itself. This can add complications for patients trying to determine the effects of any given product. This is because of a phenomenon called the ‘entourage effect,’ which simply means that cannabis’s active chemicals work together synergistically to create effects that wouldn’t come from any of their parts individually.

A perfect example of this is the way CBD reduces THC’s psychoactive effect. While you might expect a heavy psychoactive high from a THC product, adding CBD changes this. But it doesn’t end with CBD and THC. All of the active chemicals in cannabis can contribute to this. What does THC do? While it is considered to have quite energetic effects when taken by itself, when combined with the terpene myrcene, the resulting blend becomes quite sedative.

When it comes to the interaction between THC and CBD, you can experiment with finding the right blend for your needs by using products labeled with different ratios of CBD to THC. There are cases where an isolated cannabinoid may be the right treatment, but most often patients report maximum benefit from some combination of the two (or more).

Personalization of cannabis is important.

It is also important to note that there are a wide variety of CBD-only products available outside of legal cannabis programs. While some of these may be medicinal, patients should be aware that there is little to no regulation on these products, and they may not be safe for consumption or actually contain CBD. Using CBD products within the context of a regulated cannabis program is a safer option because of mandatory testing for potency and contaminants.

Overall, CBD and THC have a lot of similarities when it comes to the conditions they treat, but they can have big differences in how they work and how they subjectively feel. For many conditions, both options could be helpful, giving patients some freedom to pick an option that feels best to them. Still, for others, one works best. If your condition wasn’t mentioned here, talking to a cannabinoid-specializing doctor is a great way to learn more about what would work best for you.

Looking to experience the entourage effect? Give these full-spectrum products a try.