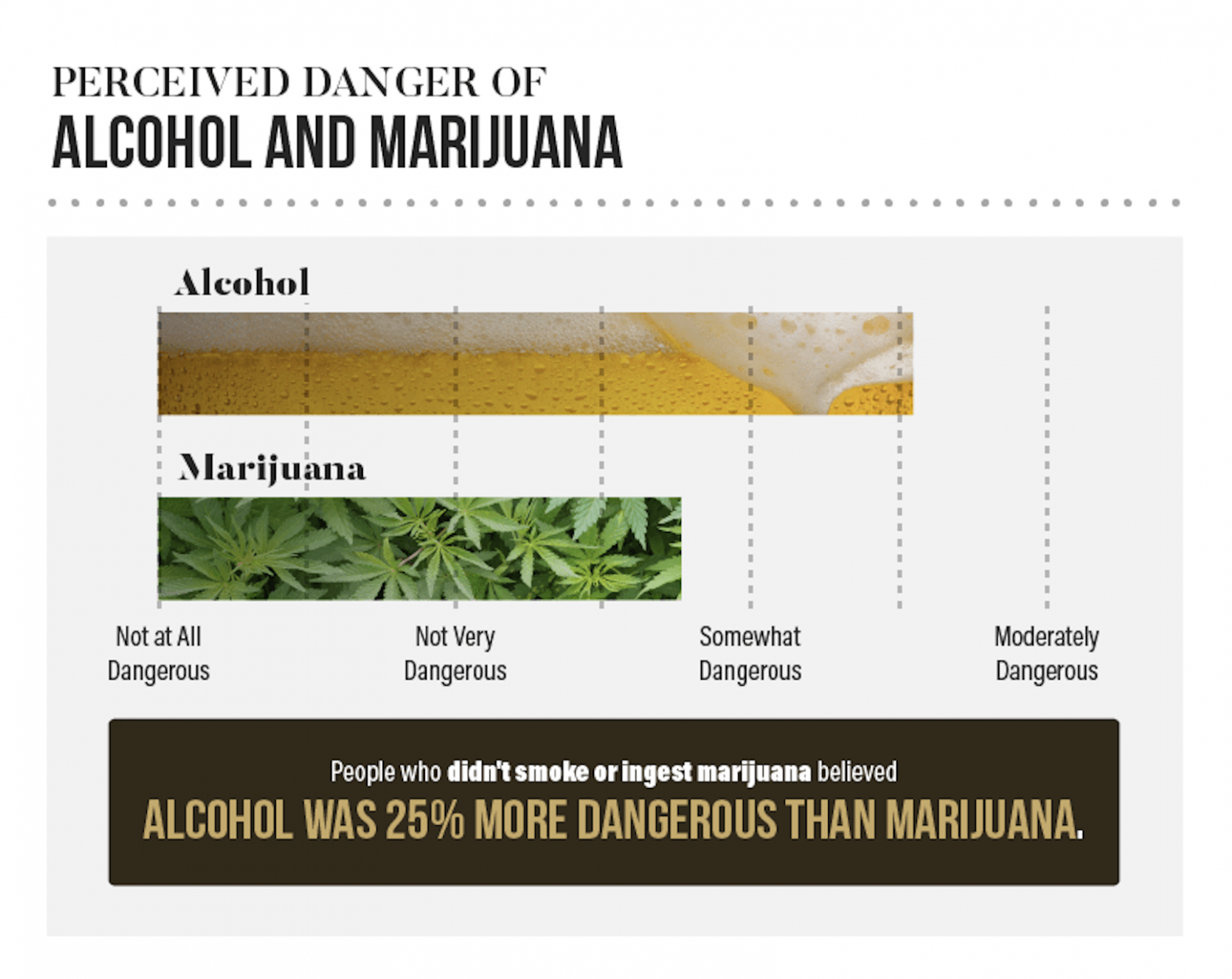 The beverage industry is evolving, and many young people find marijuana a more appealing alternative.

The majority of the 55 million recreational marijuana users in the U.S. are millennials, according to a 2017 Yahoo News poll. Most millennials use marijuana socially: Only 25% of them smoke alone. Millennials drink far less alcohol than past generations, and the share of college students who drink alcohol daily fell from 4.3% in 2016 to 2.2% in 2017, a drop of more than four percentage points from the 6.5% of college students who used alcohol daily in 1980.

In contrast, an estimated 10.6% of U.S. adults aged 65 and up are binge drinkers. Those who binge drink are more likely to be male and currently use cannabis and/or tobacco, the research found.

A New Market is Opening

Recreational cannabis was a $6 billion industry in 2016, and, as more states move to legalize marijuana, it’s projected to increase more than 700% to $50 billion in annual legal sales by 2026, according to financial firm Cowen and Co. The average marijuana user spends $647 on legal purchases of the drug annually. (It’s tiny compared with the U.S. alcohol market, which is worth around $58 billion a year).

As anxiety over the pandemic rose, so did alcohol and marijuana sales across the country. That’s not exactly surprising. One piece of this trend that is worth taking a beat with is that parents are increasingly choosing weed over booze, by wide margins.

Of parents who have tried cannabis, 52 percent increased their consumption during the pandemic compared to 33 percent of adults without young kids. And while many parents are also drinking, 57 percent said they stopped or decreased their alcohol consumption in exchange for cannabis, according to a survey of nearly 2,000 adults.

Although abstinence is the healthiest choice, cannabis is likely the least damaging if you are going to indulge. But making that comparison is tricky. Many studies have investigated all the good and bad alcohol can do to your body and your life. There’s been much less research on cannabis. The data that does exist suggests marijuana is safer in terms of physical and mental health, addiction, and family life. “Alcohol is a more dangerous substance. Period,” says Meenakshi Subbaraman, the director of statistical and data services at the Alcohol Research Group. Why? Here’s the breakdown.

Effects of Cannabis and Alcohol on Physical Health

In terms of physical health, cannabis is the clear winner. In the very short term, alcohol is more likely than cannabis to leave you reeling the day after. Longer-lasting effects also skew toward cannabis as the lesser of two evils. Alcohol can increase the risk of several types of cancer and can weaken the immune system, in addition to these effects, according to Healthline:

The physical effects of cannabis vary depending on how you use it. Smoking has more associated health consequences than, say, eating edibles. Smoking flower can cause lung damage and increase the risk of developing a cough or bronchitis. Some studies have found a link between smoking cannabis and heart issues, but it’s unclear if that’s due to the cannabis itself or the smoking.

Effects of Cannabis and Alcohol on Mental Health

Comparing the risks of alcohol and cannabis gets murkier when it comes to the brain and mental health. The clear worry here is addiction. In 2019, more than 14 million adults in the U.S. met the criteria for alcohol use disorder, otherwise known as alcoholism. In comparison, about four million had cannabis use disorder in 2015. However, the language around weed and addiction is fuzzy, and not all of those with cannabis use disorder have an addiction.

More people drink alcohol than use cannabis, so the above numbers don’t give the full picture. Instead, experts look at how likely each substance is to cause addiction. Many people who use cannabis don’t think it’s addictive, but 7 percent of people who try marijuana develop an addiction, according to the Centers for Disease Control and Prevention. Still, addiction to cannabis is less of an issue. “The addiction potential is higher for alcohol,” Subbaraman says. “It’s more likely to lead to addiction among people who use it.”

Some experts recommend that people grappling with an alcohol addiction move to cannabis as a substitute.

The same is not true the other way around. “I have never heard anyone suggest that alcohol might be a substitute medication for another drug,” Subbaraman says.

Drinking, especially long-term or heavy drinking, can mess with the brain, leading to learning and memory problems and increase the risk of anxiety and depression. Heavy drinking may cause Wernicke-Korsakoff syndrome, a brain disorder with symptoms such as amnesia, confusion, and hallucinations. Alcohol can also directly damage brain cells, but most resulting cognitive impairments are reversible after a year of sobriety.

Once again, the data regarding your brain on cannabis is lacking. There is some evidence that cannabis can trigger the onset of schizophrenia in some people, especially those with a family history of the condition. Using cannabis near-daily and in high doses occasionally leads to anxiety and paranoia, according to the CDC. It’s researched that people who use cannabis long-term are also more likely to develop social anxiety than those who abstain. Whether cannabis changes the brain itself — and whether that has any effect on day-to-day life — is understudied, and results are conflicting for adults.

Effects of Cannabis and Alcohol on Mortality

If you’re hitting the bottle hard, overdosing is a real concern. Hitting the vape pen hard? Not so much. Alcohol kills 88,000 people each year, and cannabis kills zero, according to the American Addiction Centers. To get a lethal dose of THC, the main psychoactive compound in marijuana, you would need to smoke between 238 and 1,113 joints in one day.

But overdosing is not the only way that increases the risk of death. In 2010, 1.5 million people died worldwide from alcohol-attributable cancer, liver cirrhosis, and injury, according to a 2014 study. Nearly 1.2 million of those deaths were among men. That said, how much you drink matters. Light and moderate drinking have a reduced risk of death from all causes, whereas heavy drinking increases the risk of all-cause mortality, according to a study of more than 330,000 people. (Although this is a large and rigorous study, long-term mortality for moderate use of alcohol is difficult to pin down and there are a number of quality studies that flip this finding). The jury is out on whether cannabis increases the risk of death.

Impact on the Community

Alcohol use contributes to aggressive and violent behavior. Marijuana use does not. Studies have repeatedly shown that alcohol, unlike marijuana, contributes to the likelihood of aggressive and violent behavior. An article published in the Journal of Addictive Behaviors reported that “alcohol is clearly the drug with the most evidence to support a direct intoxication-violence relationship,” whereas “cannabis reduces the likelihood of violence during intoxication.”

Alcohol use is a major factor in violent crimes. Marijuana use is not. The National Institute on Alcohol Abuse and Alcoholism estimates that 25-30% of violent crimes in the United States are linked to the use of alcohol. According to a report from the U.S. Dept. of Justice, that translates to millions of alcohol-related violent crimes per year. By contrast, the government does not even track violent acts specifically related to marijuana use, as the use of marijuana has not been associated with violence. (Of course, we should note that marijuana prohibition, by creating a widespread criminal market, is associated with acts of violence.)

As cannabis becomes more accepted worldwide, some people are switching from drinking to using cannabis. The risks of chronic alcohol use and alcohol overindulgence appear to be more serious than those associated with comparable cannabis use. The growing public perception that cannabis is a safer alternative may be driving people away from alcohol and toward cannabis.

So you’re probably wondering, with all of this information the question remains, alcohol or cannabis? What side are you on? Perhaps we can shift our thinking and instead of taking sides, we can all agree that both alcohol and marijuana have their risks. The overall take-home message may be if you are about to drive a car, if you are an adolescent, or you are pregnant you probably should not use either one.

With cannabis becoming more available and deemed an essential product during lockdowns across the US, people are looking to THC to help their overall state of mind and wellbeing, not to get high. People looking to relax, sleep, and even focus can now use products like full-spectrum, which are low-dose, designed for specific states of mind and health.

So who wins the cannabis vs alcohol battle? Comparing both, it seems that cannabis is the safer option – or at the least damaging – of the two. At least, it’s the main one where if you end up consuming more than you should it will only result in a very bad trip, but not death. However, the fact remains: we need more research & evidence in order to have hard, real facts in order to determine which substance is better.